After a good night of carousing in Devil's Elbow, Billy leaves the Golden Lady saloon and is confronted by two figures in the street. 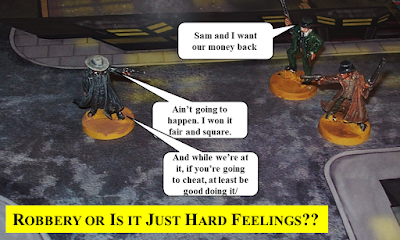 Gambling in THW is a good way to gain increasing Rep d6, which can help you to improve your Rep. But when you leave the gambling place, especially after winning, there's a chance you could run into problems. 1st up - There's a chance that you can get robbed. Winning at gambling increases the chance of it happening.

2nd problem - Hard Feelings If you win at gambling, the NPCs that lost could decide to have Hard Feelings and will meet you outside to get their money back. This time - it was a case of Hard Feelings. 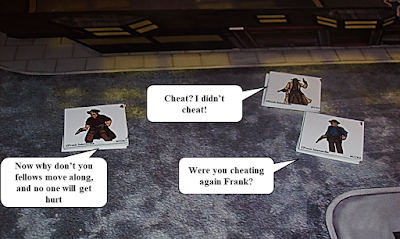 You can play Six Gun Sound - Devil's Elbow with minis or paper counters. In fact, we've included two color card stock Battle Boards and great color counters AND some awesome A-Frame cowboy counters. Brett at Precis Intermedia has provided these minis and if you haven't seen all their products, rules, terrain tiles and great paper minis, check them out. 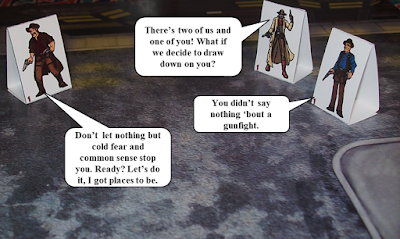 The Confrontation can escalate from a good old fashion fist fight to a draw. The NPCs have to roll to see if they escalate, but as a Star , I decide it's time to "throw down". 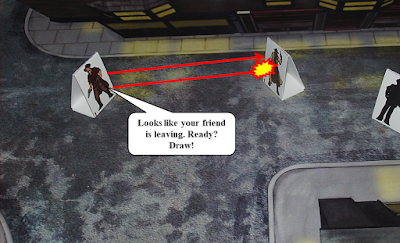 Stars can do what they want but NPCs have to take the Will They Draw Test to see if they will stick around. And looks like the Townsfolk wants nothing to do with. Billy and the NPC roll 3d6 versus Rep and Billy passes 2d6 with a passing d6 total of 5 (3 and 2). The NPC passed 3d6, but scored a total of 4 (2, 1, 1). Billy goes first and rolls once on the Draw Damage Table, scoring a 2. 6 is Obviously Dead, Rep or higher but not a 6 is Out of the Fight, lower than Rep - reduce target Rep by highest passing d6 of the shooter so the NPC drops from 4 to 1. He takes the Continue On Test, passes 1d6 and goes Out of the Fight.