Part One
Turn One Activation dice are rolled and the Hishen go first. Closest PEF rolls on the PEF Movement Table and passes 2d6. It moves 8" directly towards the Assassin, staying in cover. Once in view of the Assassin the PEF must be resolved. Rolling 2d6 versus a Rep of 4 - the PEF is resolved as pass 1d6. "Something's out there." This means take future PEF resolution with 3d6, counting the lowest 2d6. The PEF is removed. Other PEFs roll for movement and are moved. 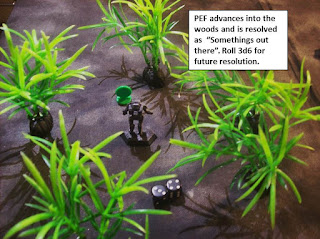 Turn One Free Company activates. I move to the edge of the woods - keeping in cover, but coming into sight of the two remaining PEFs. Rolling on PEF Resolution Table for the closest PEF I score a 5, 6, and 6. Passing 0d6 means the PEF is nothing and removed. 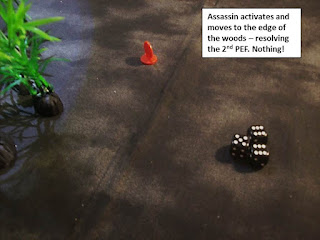 The third PEF is resolved and passes 2d6 - Contact! There's enemy, but how many? I roll 1d6 and score a 4 - same number as group. One enemy Mech, rolling 1d6 on the What Are They Table using the Hishen CM and their Mission (Patrol) gives me a Class 4 Mech. Same Class as the Assassin. I choose a Jenner that I have stats for. The Hishen Pilot has a Racial Attribute - Slight - Counts a -1d6 in melee and rolls for the other. Resilient - Ignores the first -1 to Pilot Rep from injury. 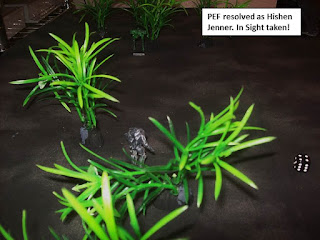 In Sights are taken, see who will react first. The Assassin starts with 5d6 for Rep, +1d6 for Quick Reflexes and -1d6 for the Hishen being in cover.  Looking for successes - score of 1,2 , or 3 - I roll 5d6 and score 3 successes. Adding a +1 success for having an EWS (Electronic Warfare System) gives me a total of 4.
The Hishen starts with 3d6 and counts a -1d6 as the Assassin is in cover. 3d6 rolled, and 2 successes scored. Hishen do not have EWS; the Assassin wins. It reacts first. 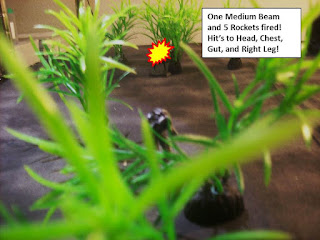 Looking on the Assassin Roster Sheet the Assassin fires with one Medium Beam, a Rocket 2, and Rocket 3 pack. One beam and five rockets are rolled individually on the Ranged Combat Table. Each d6 is added to the Rep of 5 for the shooter. Four hits, rolling twice for each hit due to the Marksman Attribute, gives a wide range of locations.

Rolling for damage on the head and chest hits are no effect while the Gut and Right Leg take 1 Armor Point hit each. I mark this on the Jenner Roster Sheet, reducing the locations from 2 AP to 1 AP each.

The Hishen now takes a Takes Damage Reaction Test. Adding 1d6 for being in cover the Hishen rolls 3d6, but passes only 1d6. It Ducks Back and loses 1 Rep.

It's now Turn Two and Activation Dice are rolled.  The Hishen goes first again, but what will it do? The Hishen is on a Patrol Mission, but once contact is made I need to roll on the NP Patrol Reaction Table to see what they will do. Rolling versus Rep we see that it goes to a Fighting Withdrawal. Note that players would decide what they want to do. The Jenner falls back deeper into the room.

The Assassin now activates and fast moves in pursuit.

Tables - Here's a quick note about the tables used in THW games. When playing head to head there are no more tables than you would find in other rule sets. In addition, the tables are simple and easy to remember. Where the other tables come in, is when you play solo or same side against the game. This makes the Non Player forces act in realistic ways while keeping you in suspense. 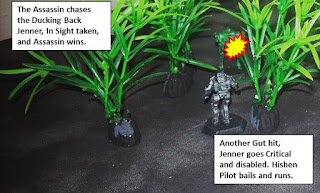 In Sight is taken and the Assassin wins again, fires and scores another Gut hit. Reducing the Gut to "0" armor means I need to check the Critical Hit Table. Looking on the Critical Table, I see that the Mech is disabled and the Hishen Pilot bails. All three PEFs have been resolved so the Assassin could complete its Missions without running into any additional enemy, right? Wrong.

Looking on the Next Mission Table under having a successful Patrol, I see that my next Mission will be an Attack.

Hopefully I can succeed in the next Mission, but having such a low CM might still be disastrous!