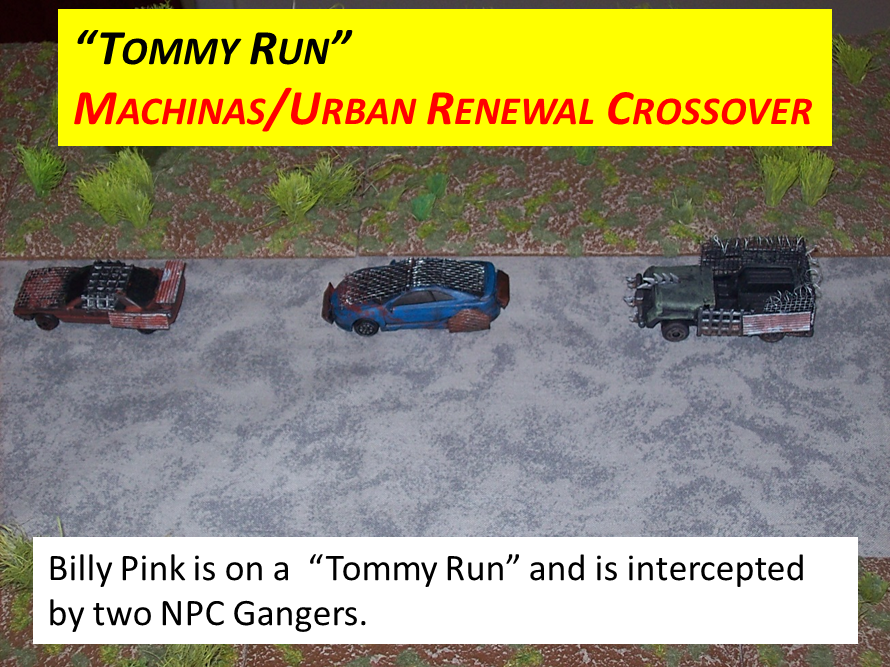 Here's an AAR of how Machinas - Death Races in the Wasteland can be used with other THW games. In this case Urban Renewal. Somewhere outside New Hope City.

I roll up the info on the Gangers and their vehicles, lay out the info as a Dashboard for each vehicle, and roll to see in what spots they are on the road. Billy, as he is being chased, is in the 1st spot, the blue Ganger the 2nd and the green Ganger the 3rd.
As the Bonus Cards are used they are discarded, each card equal to 1d6. As the Attributes are reduced. we flip the cards to reflect it.

As the Gangers are Non-Players, the game mechanics will run them. 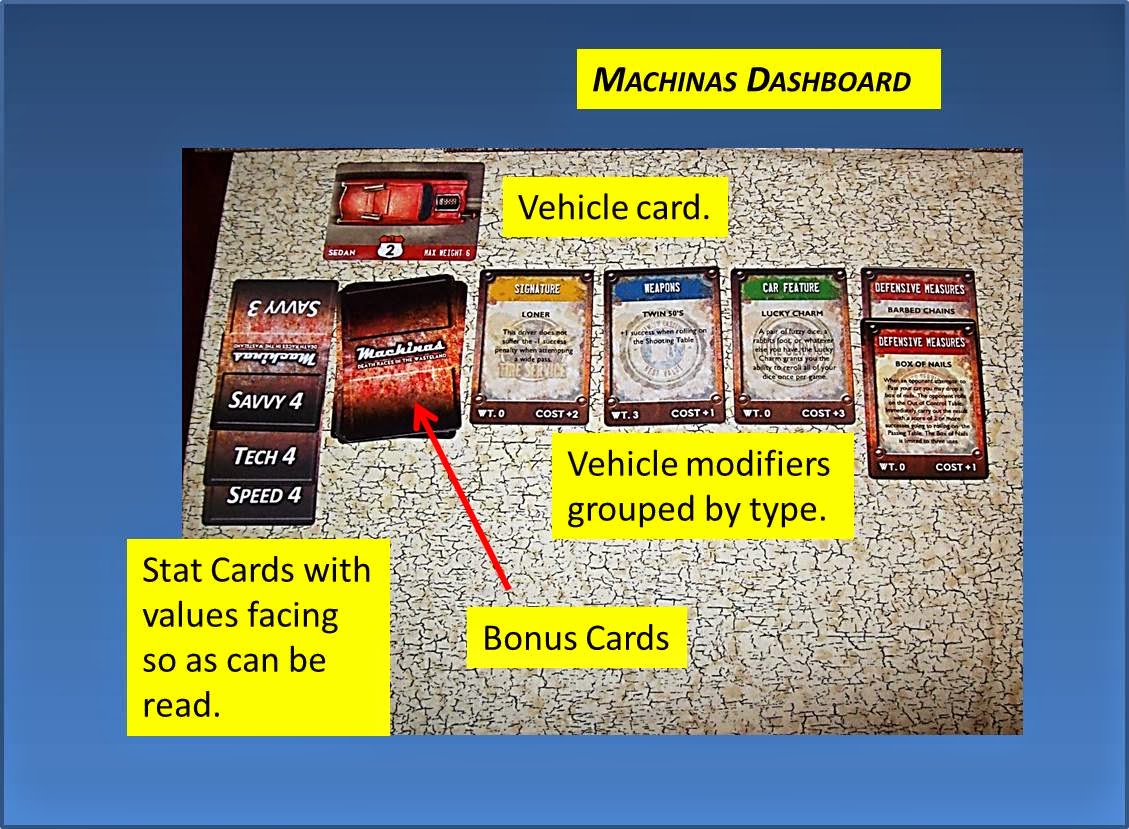 Each turn starts with the Challenge Phase.  The chasing vehicles roll to see if they can pass or move forward. The tail end Ganger can. 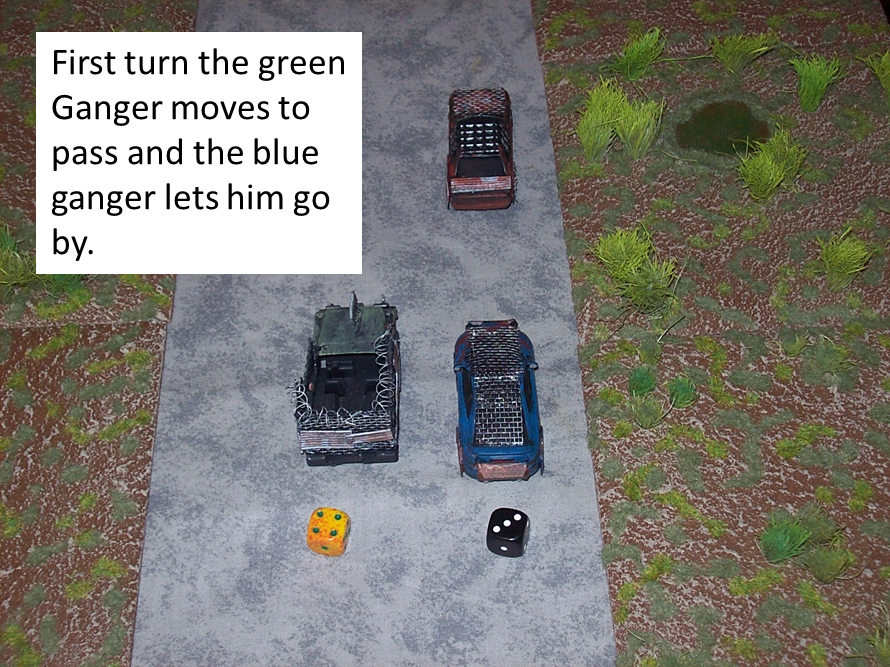 Even though the blue Ganger won't contest the pass, the green Ganger must still roll for success. 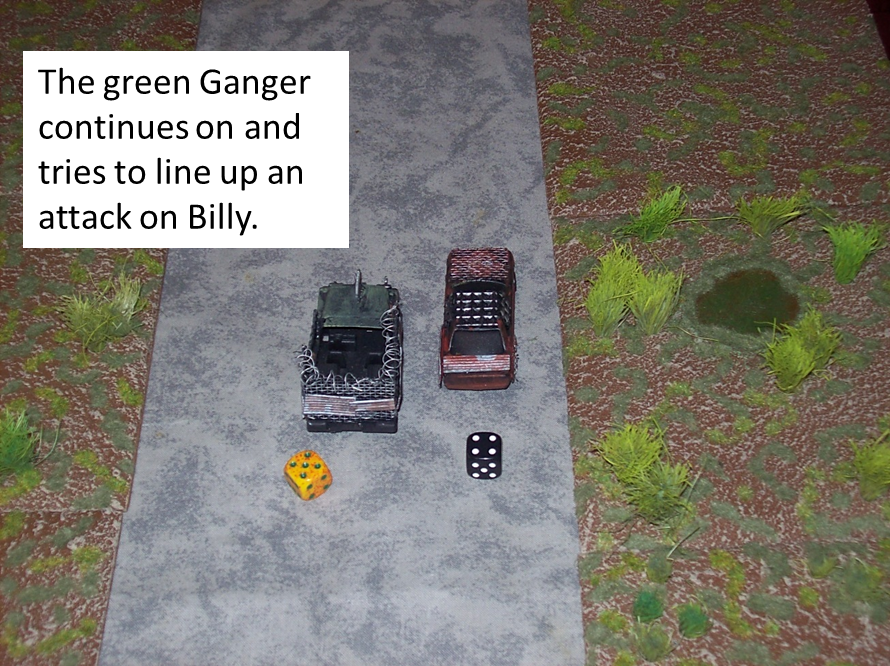 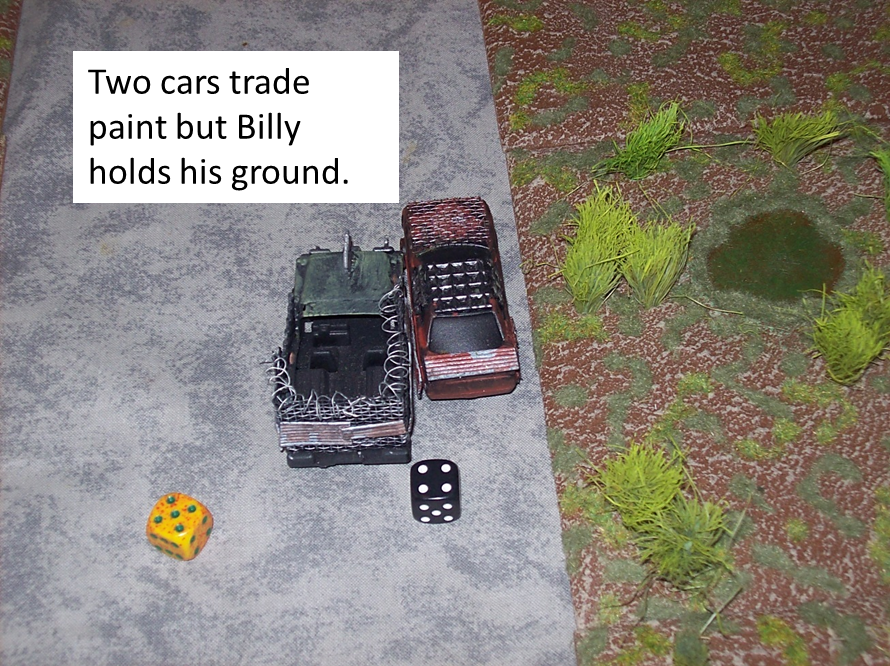 They bash but to no effect. 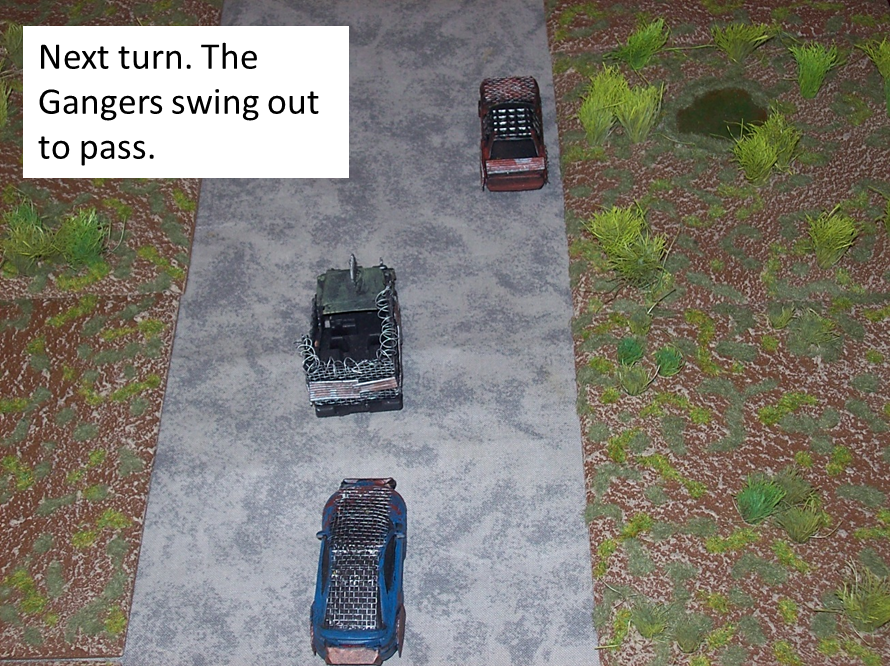 Next turn the Gangers roll to pass and this time both are successful.
It's called the Pass Phase for short but it includes lining up the target to shoot at it or bashing into it. Each driver has Bonus Dice that they can choose to use, or in the case of the NPCs , they are rolled for. The green Ganger successfully lined up a Bash but I used 5 (half) of my Bonus Dice and gained an advantage. Scoring 3 more successes than the green Ganger caused him to lose control and wreck. 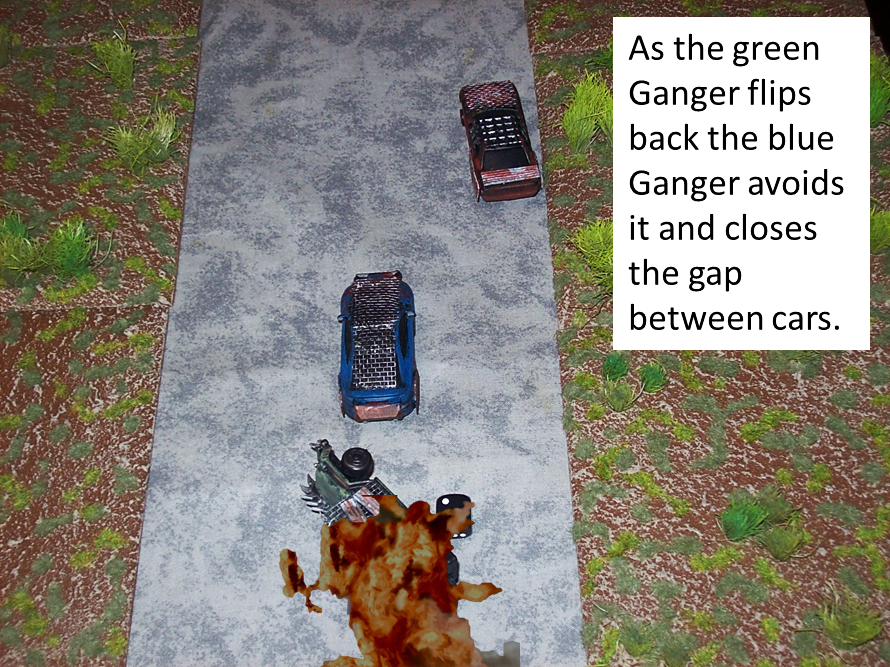 The blue Ganger evades and tries to line up an attack  but can't. 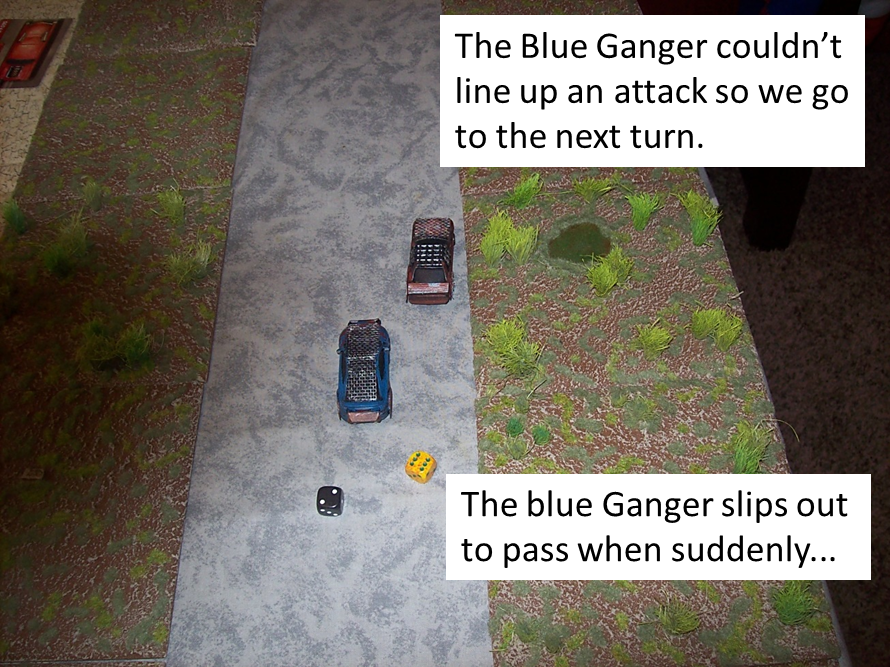 The Challenge Phase sees the blue Ganger move out to pass. As Billy can't fire backwards he's at a disadvantage. So I try and drop back (pass) and slip behind the blue Ganger. This is resolved as if passing, but in reverse. The blue Ganger rolling badly also helped! 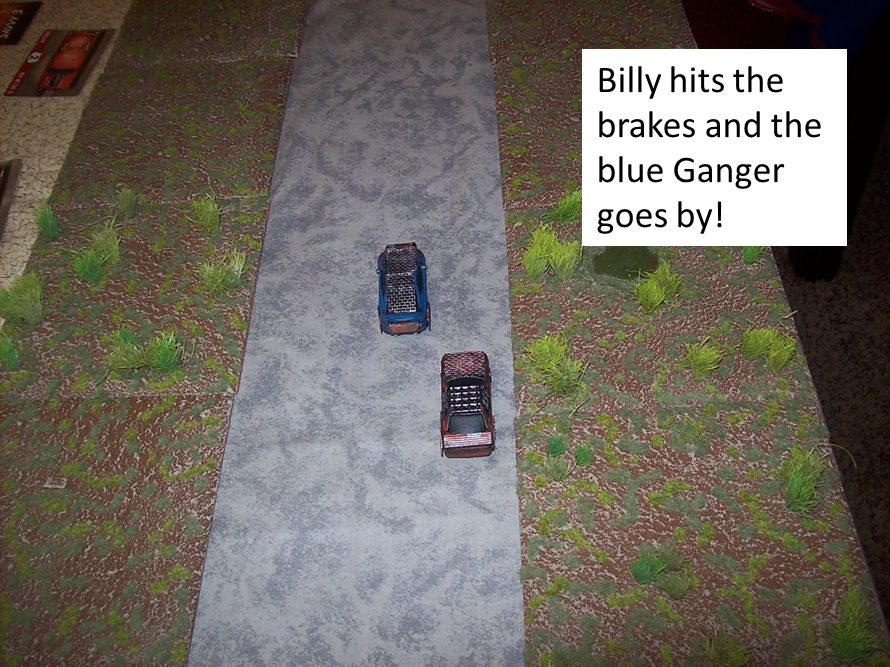 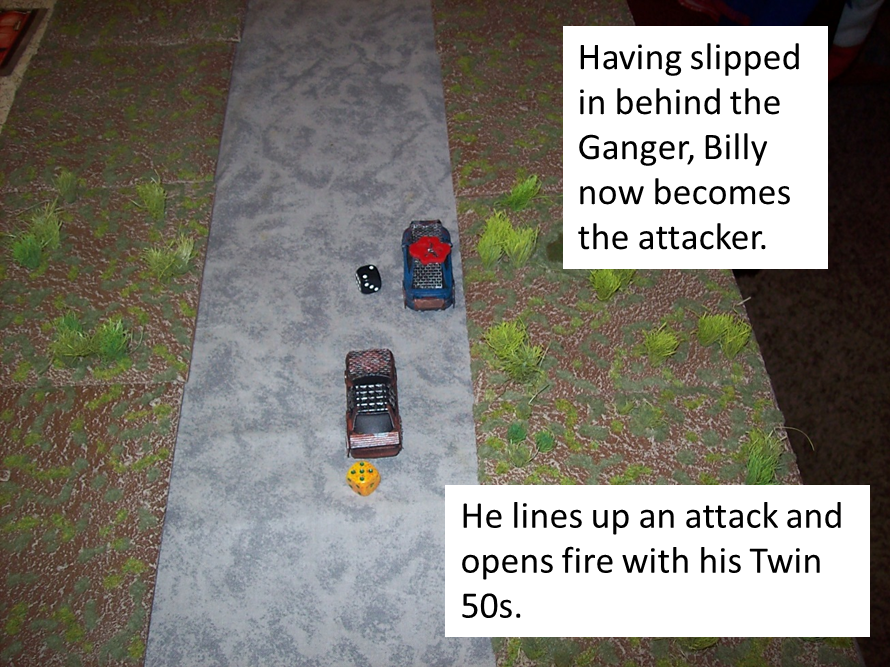 The Twin 50s cause damage to the opposing car, it loses one Speed or one auto-success. Time to attack! 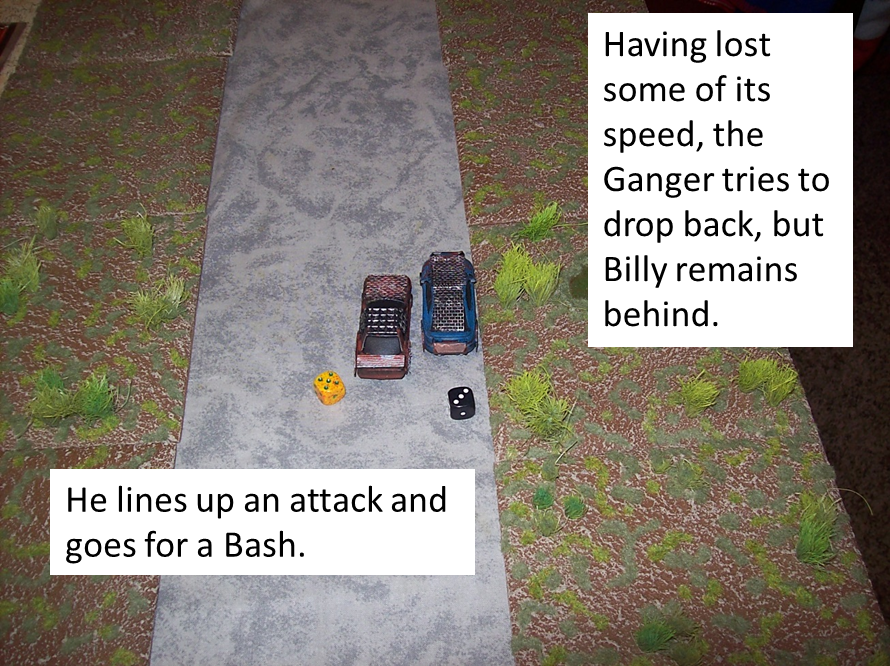 Billy goes for the Bash. 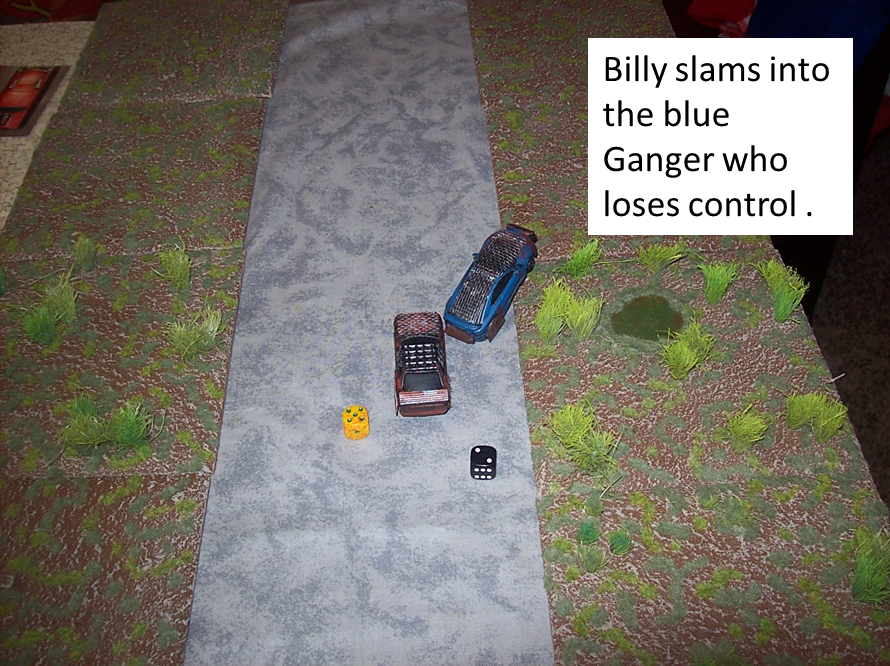 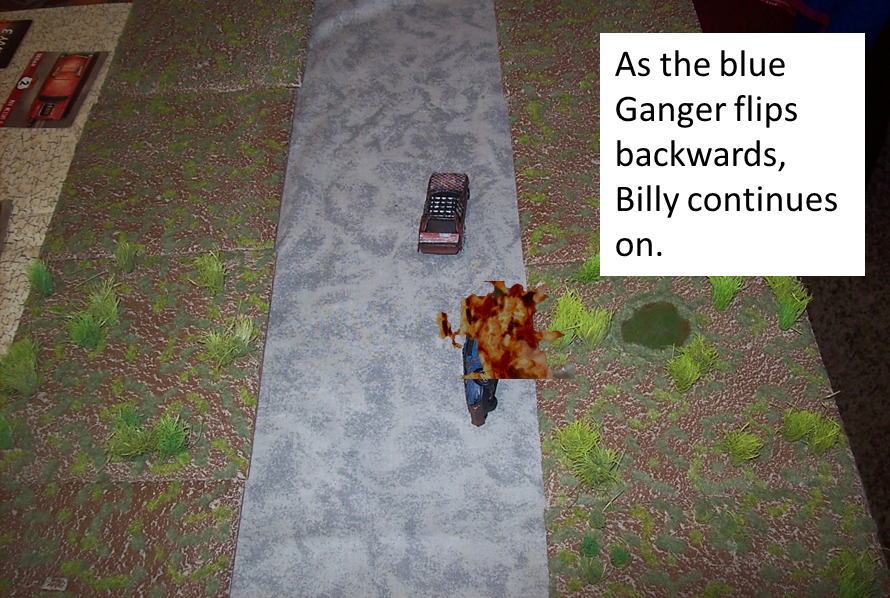 There are rules for stopping and salvaging parts from the defeated vehicles. Normally Billy would do that but that increases the chance of more Gangers. Besides, he has a job to complete.