"So, uh, what's so different that you have to do an update for ATZ - Better Dead Than Zed?"
Weelllll, let's go over some things - presented as the first half of this AAR - Panama.

We start with Billy Pink and Carolee cruising down the open road.

Push the button. You know you want to! 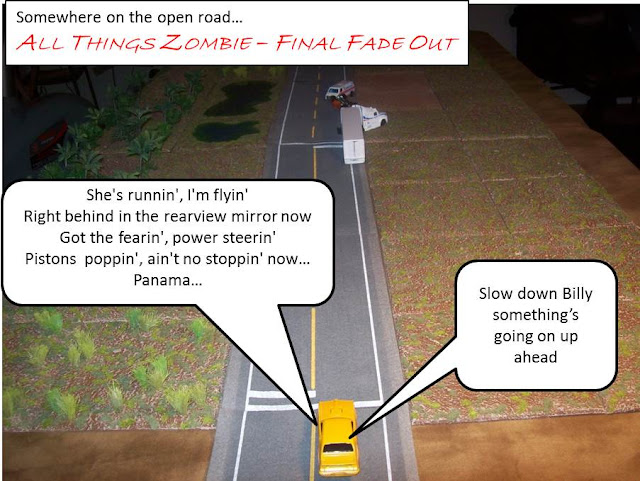 Billy Pink and Carolee are cruising along in a rural area when they spy a semi and what appears to be a wreck. Slowing down they approach the scene. There's six zeds wandering about and three PEFs - Possible Enemy Force markers - unseen by the duo.

First up, we've overhauled the vehicle rules. Vehicles are always moving both when active when inactive. Word of advice, as you're going to be moving just as fast when inactive you'll do well to plan your move and learn how to drive. As the car moves on the Zed activation portion of the turn the PEFs also move, staying out of sight.

PEFs. What's become a staple in THW games isn't in ATZ-BDTZ. We've got four different PEF contact tables in FFO to be used at various times during the game. All are time and area sensitive to better reflect the differences between the first 30 days. And yes, we've also included the PEF contact table for after 30 days. 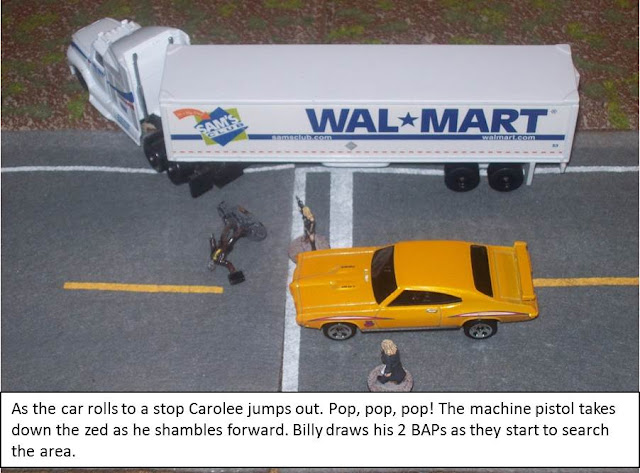 Billy and Carolee activate and roll to a stop. A zed appears from behind the Walmart truck just in time to get popped. 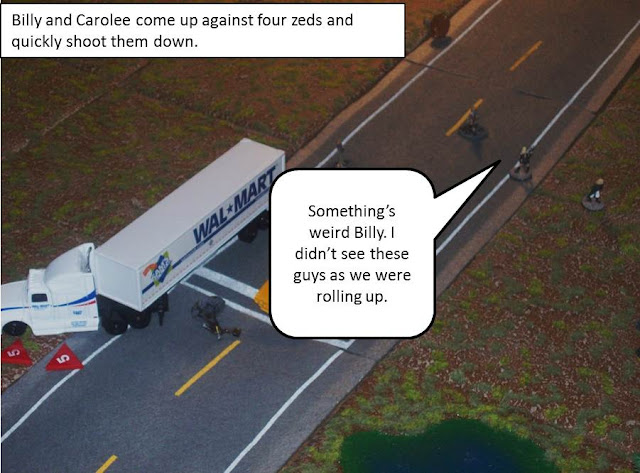 Carolee has got it right. Zeds can be PEFs now and even more interesting, zeds are rolled for and placed as the event happens. So if you pop off three shots at some zed head you roll three d6 to see if you generated zombies. No more rolling at the end of the turn 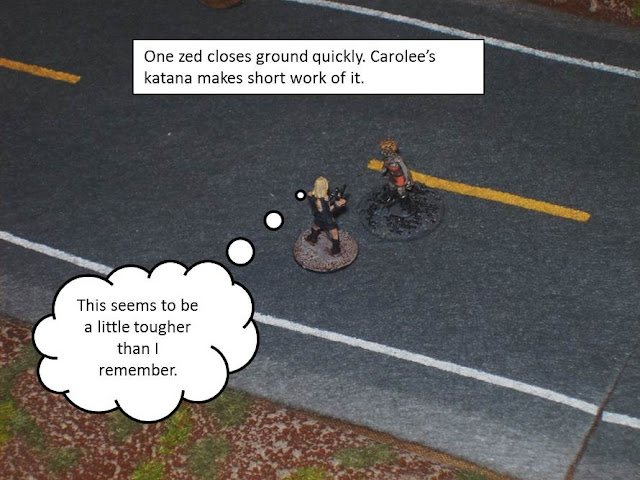 "Yes Carolee, they are a bit tougher." Good news is you can only fight one zed at a time now and no longer have to split melee dice. Bad news is they're tougher in melee. 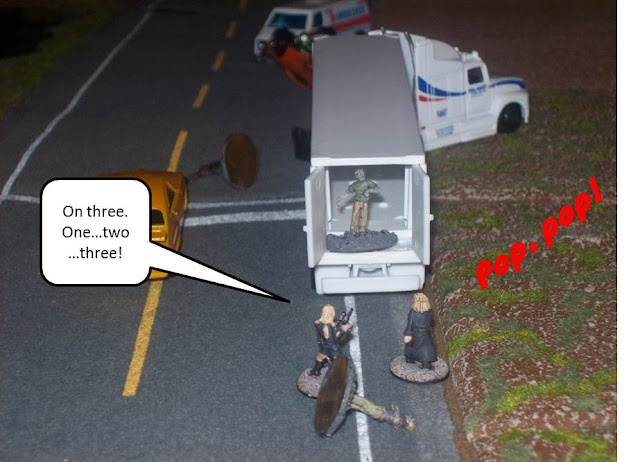 As the zombies activate again one PEF comes around the corner and into Billy's sight. A quick resolution results in nothing "but something is out there". The Encounter Rating rises to 2. When active Carolee pulls open the trailer and Billy shoots the lone zombie inside. A quick search finds some Food but nothing else as the truck has been picked clean. 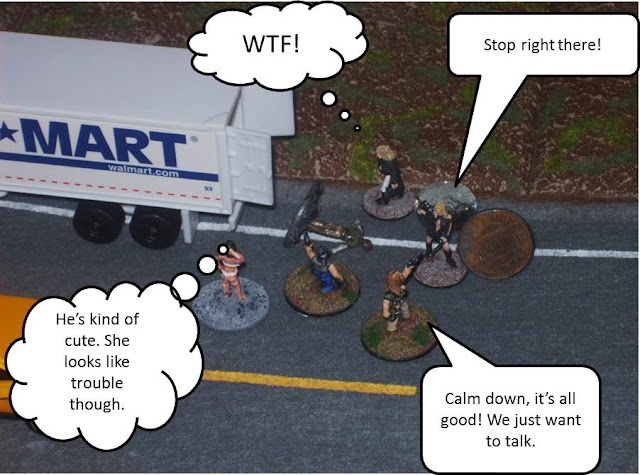 Another zombie activation and another PEF comes into view. A quick roll resolves it as three women. They immediately begin to negotiate. They tell Billy and Carolee that they want to barter for items but Carolee isn't interested. do (failed Meet & Greet Test). Being a bit of a lady's man I figure Billy will try a People's Challenge with Carolee (another Star) to get her to agree with him to ask the three girls to join them. Carolee isn't interested in adding three more women to the group so that stops that idea (failed People's Challenge - success would be let's ask them to join and the failure was  Carolee saying "I don't think so.".

With the PEFs wandering on the table you'll run into other humans now and not just in when buildings like before. Now you can be in the open and run into friends, neutrals that you can interact with and of course, enemies. 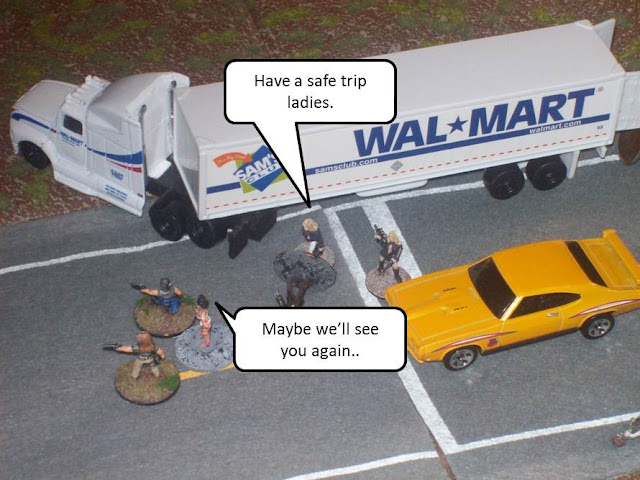 The three girls and the two Stars part ways. They head off towards the ambulance (?). 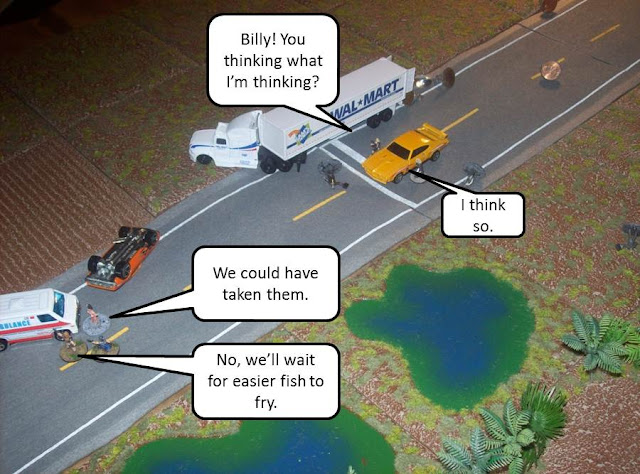 As the trio leave Billy and Carolee have a bad feeling about the whole experience and with good reason. I always try and stock my games with recurring NPCs complete with motives, etc. These three girls specialize in setting up fake accidents on lonely highways. Then when others come by and stop to check it out they rob or murder them. Just an example of what you can do with the ATZ-FFO campaign system. 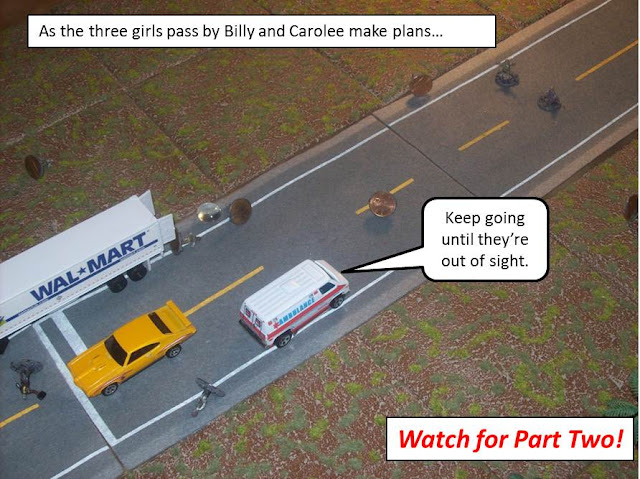 As the girls and our Stars head in  opposite directions I already have my next Encoutner planned.