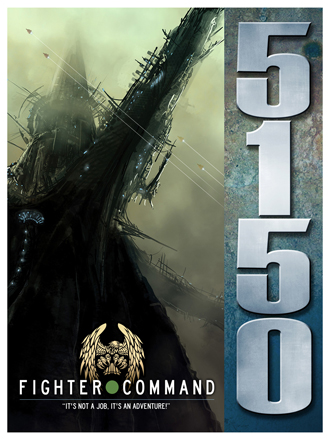 "Shut up kid, just keep your eyes up." snapped the the Volunteer Pilot. "This guy could be trouble. Why do I always get  "hotshots" for Wingmen?

Combat is quick and dirty and with the Reaction Tests you'll be able to fight solo or same side. That's what this test is about, a solo furball where I'll be running the two Volunteer PDF Pilots against some mercenary Free Company Fighters. Gaea Prime Planetary Defense Forces always welcome "volunteer" Pilots with experience and they pay pretty well too. Which is why Billy Pink is here.

Billy is a Rep 5 Star with two Attributes. I chose Exceptional Pilot (+1d6 when attempting a Special Maneuver and more) then rolled Poser (roll only 1d6 when taking the Received Fire and Ship Down Tests - nothing to worry about) Billy  is flying a Bee Light Fighter. Note that these Attributes only apply when flying in FC and not in other rules sets like New Beginnings.

The plan is to fly Patrol and turn back any Mercenary Free Company spacecraft.

The Black Heart Free Company had a two fighter Flight. Both Pilots were  Rep 4 Grunts flying GA-16 Light Fighters.
I played them straight up with only their Navy Attributes. This is Risk Adverse or -1 to Rep when the Ship Down Test is taken.

Lafitte had just been assigned as Billy's Wingman so I wanted to get into a fight as fast as possible to get him some Fame Points.

So what we'll do in this AAR is go right down the Checklist you'll find in FC to walk you through your very first time. After the first Mission most of this will not have to be checked again. Here we go.

1 - Choose your Star. Check.
2 - Choose which Navy. Check - PDF Volunteers
3 - Reps.  Check. Billy 5 Lafitte 3.
4 - Fighter Roster Sheet. Check. All the info for the ships and their Pilots
5 - Black Box - Check. This is a sheet that places all the current info of each ship in the player's hands. You do one at the start of every Mission, think of it as the flight recorder. You do not plot movement!
6 - Campaign Morale. Check. Both 3.
7 - Controlling. Check. This is a PDF controlled system.
8 - Mission. Check. Patrol.
9 - Terrain. Check.
10 - Investment Level. Check. PDF 2.
11 - Bad Weather. Check. All clear.
12 - Mission Intel. Check. Conflicting reports at first but it proved to be Good Intel. On top of that the Free Company Investment Level was known before the Mission. It was 3.
13 - Deployment. Check, We'd enter section 8.
14 - Place PEFs. Check. Two in section 1 and one in section 5, dead ahead.
And so the game begins.
15 - Three Navigation Points in sections 1, 2 and 3 to be searched.

The game starts with the PEF in section 5 resolved by Billy's Long Range Scanner. Nothing solid but passing 1d6 on the PEF Resolution Table drives the Enemy Investment Level for this Mission up by 1, to 4. This increases the odds of running into activity.

Billy and Lafitte cruise towards section 5 at the Wasp's top speed, 5". 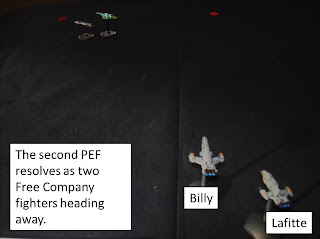 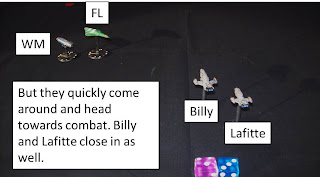