Part Two
Having failed in the first Mission, the Squad got sent in a second time. This time it was an Attack Mission and we had the 2nd Squad for help. My Squad, 1st Squad, went over the bridge while 2nd Squad would flank them through the woods and creek to the right. 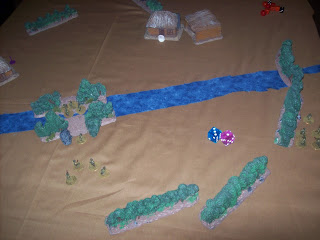 While 2nd Squad advanced  we ran into a German Squad. We exchanged fire and their LMG forced us back into the woods. My Star took an Obviously Dead result - but thank goodness for Star Power. 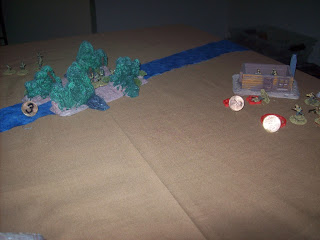 Sarge sent Corporal Pamaroyan and 4 others to the left of the building where the Germans were while we popped out and pinned them down. Lucky for us we won the In Sight. 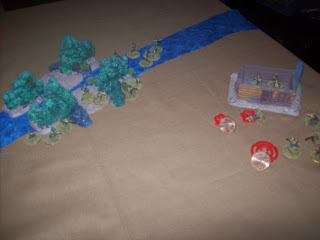 Here's the Corporal on the side of the house. 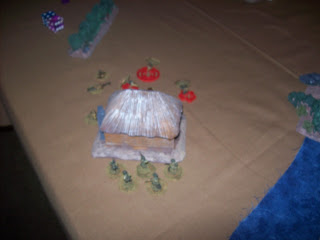 By this time the German LMG was back into play and had us pinned down again, one of our guys taking a hit. 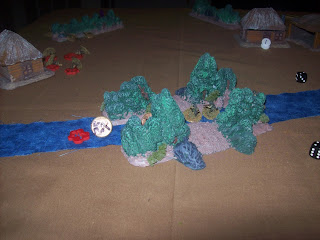 Meanwhile, 2nd Squad ran into the rest of the German Platoon - 2 Squads. 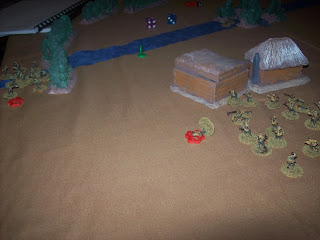 A brief firefight took place and 2nd Squad was forced to Duck Back, with a couple of casualties. 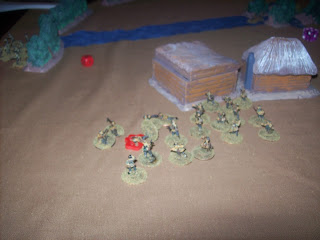 As the fire intensified Pamaroyan and the boys made a rush towards the LMG. The LMG fired and took down a couple more of our guys, but the Corporal got within range and tossed a grenade. That cleaned up our side. 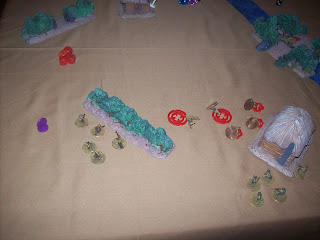 2nd Squad popped back out, and caused some casualties on one Squad, forcing them to seek cover. Unfortunately the other Squad forced 2nd Squad back. 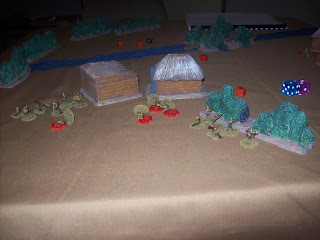 Sarge gave the order to move against the German flank. As we hot-footed it over the clear ground Pamaroyan and the boys opened fire on the huddled Germans onto their flank. Lucky for us their LMG Ducked Back. 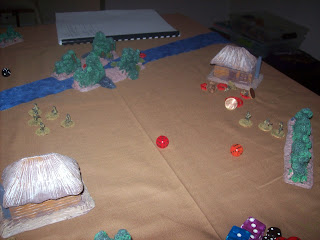 Reinforcements arrived and it was our Platoon Leader and 3rd Squad came in behind 2nd Squad. 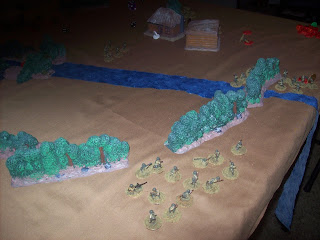 2nd Squad moved up and we got the Germans in a cross fire. We finally made it to the Farmhouse and I readied a grenade. Giving it a toss around the corner, it exploded, taking out a couple more Germans and sending the rest ducking for cover. 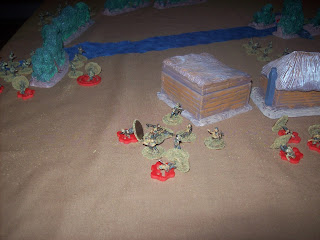 The German NCO tried to rally them but ... 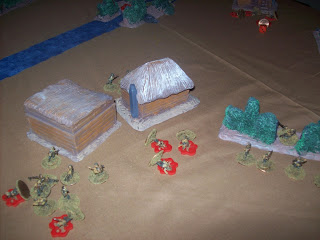 They weren't having any of it. The Germans left and headed off the table. 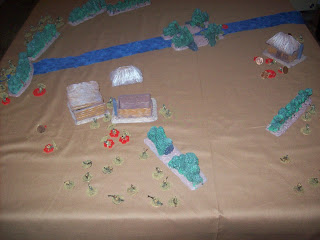 After the fight it was kind of quiet. Shelton was KIA. He was a newbie and that might have had something to do with it, maybe not. Wolke would get 5 weeks in the hospital, Mountz would get 3, but both would recover. Both would also get Purple Hearts.

Later that night we received 2 replacements. Pondok (Rep 4) had seen the shit, but the second guy, Sootz (Rep 3) was another newbie.

Oh yeah,  Corporal Pamaroyan received a Medal of Valor and was promoted to Sarge, but sent to 3rd Squad. He was replaced by Corporal Lietz (Rep 3). Pondok said he had heard that Lietz was a Greedy Bastard. We'll see.

At least we'll get some rest.