Tracking the Ships in 5150 Fleet Commander. Got a Pencil and Paper? 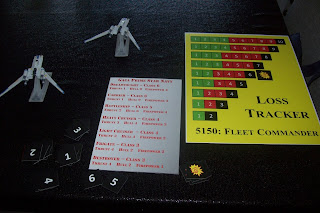 Throw it away! Everything you need to track the ships is included. In the above picture on the left are counters to track damage, then a Faction Sheet telling you what each ship has for stats and to the right is the Fleet Tracker. As you lose ships move a counter on the row and when you hit the red squares, you're in trouble - 50% casualties and your Will to Fight is dropping fast. 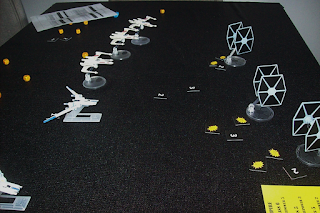 Ship takes hull damage? Track it with the counters. Stuck in Damage Control and forfeiting your next turn of action? Place a yellow Blast Marker next to the ship, remove it when next active. Easy to track, no paper and pencil required! No roster to check during the fight. 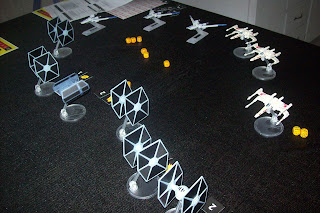 Here's a pic of a dozen ships fighting using the Star Wars Fighters. You can use any ships to play, I just counted them as Class 4 Cruisers. Play it with counters or any models you already have, you choose. Heck you can even use these!

5150 Fleet Commander and Star Navy for One Low Price! 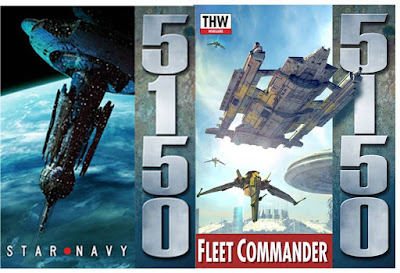 Get it here and save 10 to 20%. Already bought Fleet Commander? Send us an email and we'll refund the difference!

Posted by Ed the THW Guy at 15:30 No comments:
Email ThisBlogThis!Share to TwitterShare to FacebookShare to Pinterest 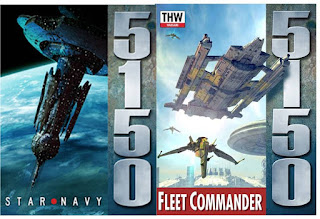 Although the two sets of rules are compatible, here’s a quick explanation of the difference between the two.  Star Navy gives you more control over each ship, while Fleet Commander places you at a higher level complete control of the fleet, not each ship.

Fleet Commander uses the same ships as those found in Star Navy, same Classes are used – 3 to 6. We used the stats for each ship in Star Navy to build the ships in Fleet Commander. Hulls sizes are reduced by half. How a ship causes damage to the enemy is not as important as the overall effect, so fighters, guns, torpedoes have been rolled together into one value in Fleet Commander called Firepower

In Star Navy you plot the movement of each ship, turns, and speed.
In Fleet Commander each side lays out their ships based on the location of its Flag Ship – in the center of the line.

In Star Navy you roll on a variety of tables to fire weapons, launch missiles or torpedoes, and launch Fighters; then use tables to evade missiles and torpedoes, try to shoot down fighters and missiles.
Fleet Commander tries to cause damage by rolling 2d6 versus the Rep of the ship with all the ways to cause damage rolled into one Firepower factor.
Pass 2d6 score a full nit, pass 1d6 and the target could escape damage and immediately return fire – something not found in Star Navy. Pass 0d6 and the target returns fire, immediately.

In Star Navy you need to find the location where the ship was hit and it takes damage on that location. The crew takes one of five different Reaction tests to see what they do.  It’s like you are the Captain of each ship.
In Fleet Commander the ship takes damage to the hull and the crew takes a Damage Control Test to see what they do. Ignore and act normally next turn, go to Damage Control and forfeit their next activation, or leave the fight.

In Star Navy each ship is checked to see if they leave the fight.
In Fleet Commander you track the number of ships lost in the fleet and when you reach excessive casualties and fail on the Will to Fight Table, the rest of the Fleet leaves at the same time. 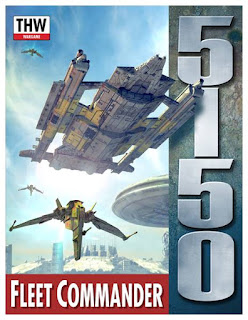 Now on sale. Play it with minis or with the counters that are included; just play it! Check it out. 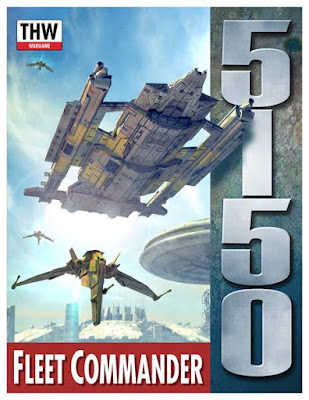 “Captains; I expect you to do your jobs. Engage!”
Your Captains move their ships, fire missiles, launch fighters or torpedoes and preform damage control. That is not your job!
Your job is to decide where and when to engage the enemy, and more importantly, when to cut your losses and leave, while keeping the fleet in being.

Your job is to decide where and when to engage the enemy, and more importantly, when to cut your losses and leave, while keeping the fleet in being…
Do Your Job!

Play it with any existing minis you already have or use the over 120 color counters included with the game. 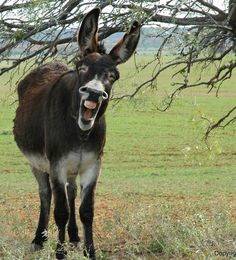 Says coupon good through May 10th. But it really means expires on the 10th. Pushed it back one more day, ends Tuesday.

25% off your entire order!
Posted by Ed the THW Guy at 13:29 1 comment:
Email ThisBlogThis!Share to TwitterShare to FacebookShare to Pinterest

and get 25% off of your order. Only good through Sunday!

http://www.twohourwargames.com/
Posted by Ed the THW Guy at 12:48 No comments:
Email ThisBlogThis!Share to TwitterShare to FacebookShare to Pinterest 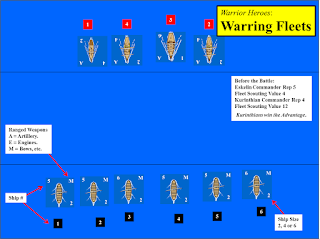 Kurinthian raiders have been causing lots of trouble for the Governor of south Eskelin. He has decided to dispatch a small fleet of 4 ships to "teach them a lesson." He has sent 1 Great Ship (size 6), 2 Warships (size 4) and 1 small Raider (size 2) under Duke Rodriguez a Rep 5 Fleet Commander.

The Kurinthians have sent out 6 Raiders (size 2) under the leadership of a Rep 4 Chieftain. The ships meet off the coast of upper Kurinthia and the battle is joined.

************
The game revolves around how well you command your fleet, not each individual ship.
These are controlled by the game mechanics being Ship Size, Crew Rep, Hull points and Firepower  points. Firepower can reflect archery (as the Kurinthians have), Artillery (Eskelin ships) or Engines - large ballistae/catapults.
The fight starts with seeing who has the Advantage, who saw who first. 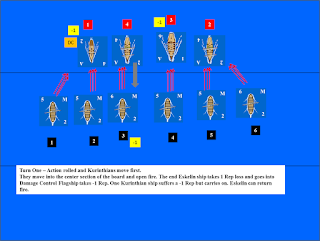 Side with the Advantage acts first, then the other side. 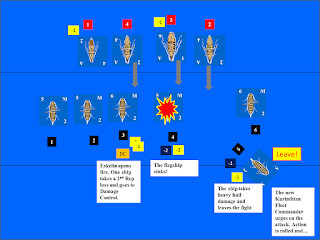 When both sides have finished, the Will to Fight Test is taken; will the sides continue to fight. 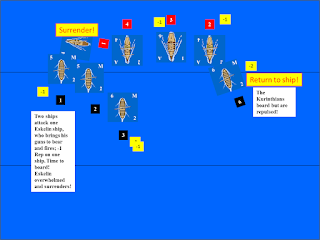 Boarding represents casualties and a reduction in the desire to keep fighting.
The table is divided into three sections and each side sets up with one empty side between them. Movement is one section at a time, remember you are the Fleet Commander, not a ship's Captain. Artillery and engines fire two out sections, archery (missile fire)only one.

More to come. Like all THW games, playable with minis or counters.