Action North of the Green River

The thud of heavy heavy hoof beats shook the ground. In the camp confusion reigned as sleepy green skins packed their belongings in haste or grabbed their weapons and set out to punish the interlopers...

Last time I wrote that I had ended the campaign season. Unavoidably off the trail for a while, when I came back, guess I had forgotten.

Turn 8 saw things winding down. Most of the goblin bands had retired to the wilds, and those on the border would do soon with winter closing in.

However I did manage an expedition into Gobbo Country. One company each of knights and cavalry, supported by one lance of feudal troops made their way northward and eventually struck a goblin camp.

The camp was occupied by four bands of greenskins, two Rep 3 and two Rep 4 groups. Unfortunately the Gobla Khan was nowhere to be found so at best I would be putting this camp out of action for a few seasons. 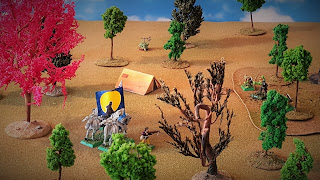 A Word About Scaling
As stated before one of my design goals is to allow this campaign to be played with very few figures. To that end it is my intention that the player(s) force can always be scaled down to 6 figures.

My troops in this force were as follows:
1 Company of Knights:
6x Rep 5 Knights

Facing my troops I could expect there to be about 8 reflecting my 3 companies to their 4 bands. I could also expect about half of these to be Rep 3 Goblins and the other half Rep 4 Orcs.

However given the vagaries of PEF's and resolution rolls combined with the tables written for this game there could be as few as 0 and as many as 16 greenskins. Also these could range from Rep 3 to Rep 5 depending on the dice. 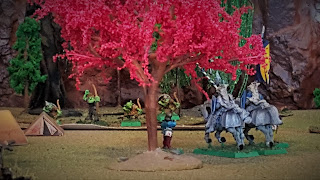 I decided to split my force. The knights and crossbowmen would hit the camp in the usual manner, entering in sections 7, 8, or 9.

The cavalry were detached to hit the camp from another direction. Which direction and when, if indeed at all, were chance elements.

Approaching the clearing in the center of the table, two PEF's were immediately revealed in thick woods to my left. One was spurious. The other turned out to be one orc and three goblins, archers all, busily engaged in covering the withdrawal of camp equipage and loot.

They loosed a volley that clattered of my armour but send my crossbowmen fleeing from the field! 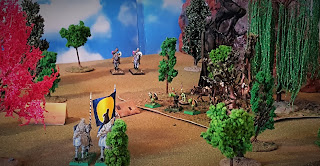 Turn four started with the arrival of my cavalry on the other side of the table.

This in turn triggered the resolution of the third PEF. 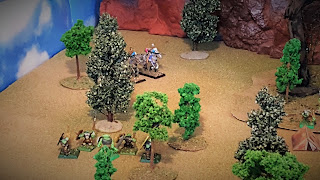 My lads put spurs and charged!
The orc archer managed to fire but missed his mark. 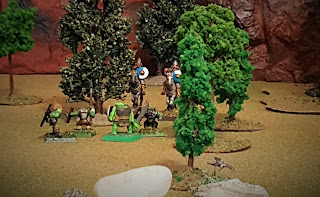 In the ensuing clash one goblin was skewered, 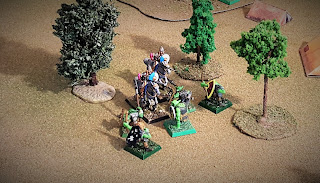 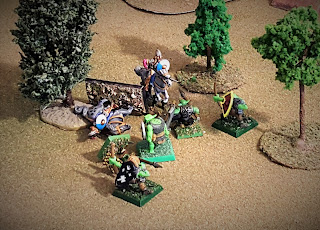 ...and one horseman killed by a lowly gobbo.
Their blood up, both sides held their ground. 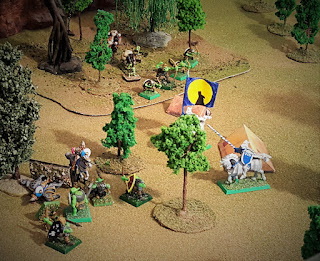 Now my knights charged into the throng, 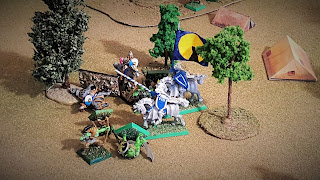 riding down orc and goblin. 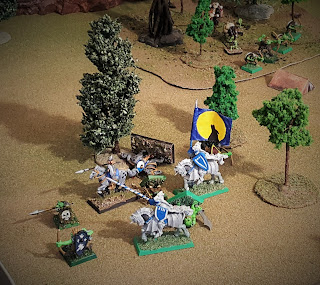 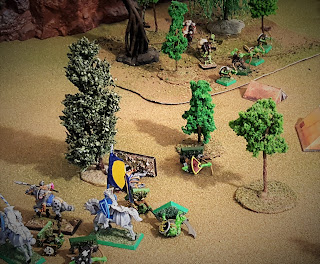 Only to be cut down.

At this point enough greenskins had been killed to neutralize the bands but I wanted to remove the entire camp from play and so needed to capture the pack animals with the first group of archers in the thick wood. 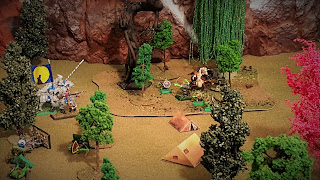 For their part they wanted to flee but being greenskins had trouble organizing themselves. Probably fell into squabbling over division of spoils or who was boss. 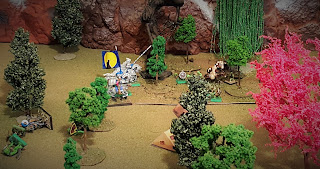 In any event my lads were on them before they could flee. 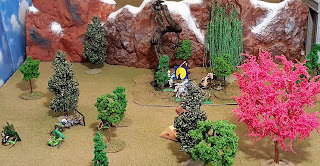 The clash was swift and terrible. 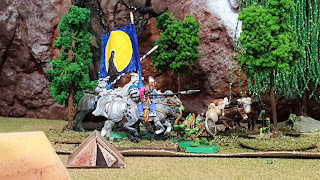 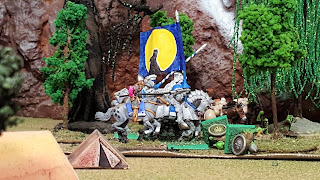 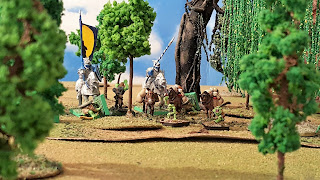 And so a successful end to this season's campaign.

I lost two settlements burned out, and one party of trekkers massacred, but this is offset by four new settlements being established, the defeat of several raiding parties, and the destruction of this camp.

As a player I could end the game here, or play a series of seasons, either any number I choose to or as many as it takes until the frontier is settled or the gobbos succeed in pushing settlement back to the walls of the city.

The design is coming along nicely, with new tables designed, more work on balancing the game,  and new procedures ironed out.

That's it for now....except for one more few of the display case as more figures have been relocated and properly displayed.

Hope you enjoyed and thanks for stopping by!
Posted by M. C. Monkey-Dew at 09:16
Email ThisBlogThis!Share to TwitterShare to FacebookShare to Pinterest
Labels: Swordplay 2015